Royal Navy in Australasia from the 1800's

"The Democratic Peoples Republic of Korea Just War Against US Imperialism" 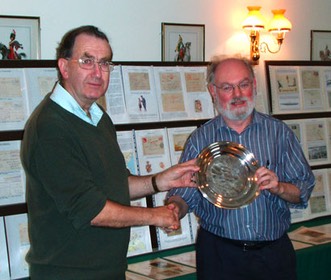 During the Forces Postal History Society annual competition for the John Daynes Plate in December 2006, Edmund Hall with an exhibit of Korean War material entitled: "The Democratic Peoples Republic of Korea Just War Against US Imperialism" "In June 2004 I took a holiday in North Korea and to say the least it was quite interesting. Staying clear of any political discussions I found, as elsewhere I have travelled, the people to be quite charming friendly and fun. Our guides (keepers?) spoke excellent English and were quite open to discussions about our country wanting to know how much we were paid and what kind of houses we lived in. What they made of it I can’t say but the comparison with their own poverty must cause some thought and one of our party gave one of the Guides the recently published guide book from Brandt which was far from complementary to the regime. Contrary to what you have read, getting in and out was extremely easy; far more so than America, their only concerns were mobile phones and video cameras. 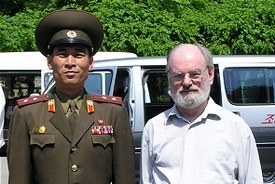 Sadly I did not get to see the military museum, or the Pueblo, although I did see it from a distance while in Pyongyang. We visited the Military Demarcation Line – Panmunjom. Unlike the pictures you normally see, the border line was deserted with only a few NK guards facing into NK with the Southern side completely deserted. After a while two Americans came out with a video recorder we waved to them while they filmed us from the ‘other side’. A little later I walked back to take another look and all the NK people had also disappeared so no doubt they were only there to entertain the tourists.I have since been to the United States and the NK visa in my passport was of no concern. I managed to buy some books in English published in NK on the Korean War and it is these I used for my write up either directly, or in the style of. It gives a different view than the books we are use to but reading around the subject does bring into doubt some of the ideas we have about the war. One of the interesting effects of the end of the cold war has been access to the writings from Russia, now diminishing under Putin, and China which again put a different perspective on our recent history. Some of these have also been put to use."