Royal Navy in Australasia from the 1800's

We had seven entries for this year’s competition. At the end of the competition members who entered gave a short talk on their respective entries. In addition we had a sizeable accumulation of material from the late Alistair Kennedy and other sources for members to sort through and buy. For this reason there was insufficient time for member’s displays. In relation to Alistair’s material this represents items not suited for disposal through Argyll Etkin auctions and is the first of many such accumulations which will be brought to various meetings. Other items will be disposed of through our auctions and circulating packet. It is going to be a long process due to the amount of material involved.

Turning to our competition voting, as usual, was by the members present at the meeting and the clear winner of the 2018 John Daynes’ Plate was Eddie Weeks with his entry on the “Zeppelin Mail of World War I”. During World War I the German Army and Navy operated some 130 airships either as bombers or for reconnaissance. Most of these airships used cachets or handstamps on mail from the crew (about 20 for each craft) indicating the mail was official and free. Mail with such cachets are uncommon and this exhibit showed examples from 12 airships together with some pictorial postcards of the airships. There were also three covers with cachets of the airship bases..

Joint second was Lorraine Maguire with her entry “New Zealand WW1 Wounded Soldiers - their Care and Convalescence in England”. This was Lorraine’s first time which took some courage as she considered entries were always of a very high standard. Her display showed postcards from No. 1 New Zealand General Hospital in Brockenhurst and No. 2 New Zealand General Hospital in Walton-on-Thames. Those wounded soldiers arriving at Southampton were sent to Brockenhurst and those arriving in Dover were sent to Walton-on-Thames. The cards covered the period from when the hospitals opened in 1916 and 1915 until their closures in 1919 and 1920. There was a photo of her father and a message on the back to his mother in N.Z. written when he was a patient there for two months, before being sent to the Convalescent Hospital in Hornchurch.

The other joint second place was Frank Schofield with his entry “Royal Navy Personnel who Fell in WWII”. The exhibit included an introductory sheet which listed casualty numbers. This was followed by 14 sheets with covers (one postcard) to or from Royal Navy officers or ratings who lost their lives in World War Two. The ships included were Hood, Barham, Royal Oak, Repulse, Glorious and Hermes as well as cruisers, destroyers, a minesweeper, a submarine and a shore base at Hong Kong.

The remaining entries (in alphabetical order) were from: 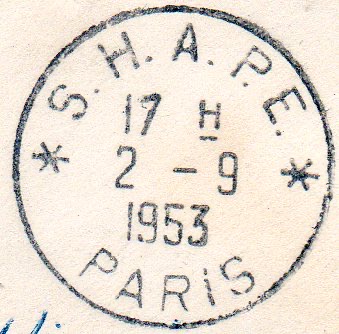 Michael Dobbs with an entry titled “Supreme Headquarters Allied Powers Europe - SHAPE”. Supreme Headquarters Allied Powers Europe (SHAPE) was a NATO command headquarters and was initially established in the Paris suburb of Rocquencourt on 2 April 1951. In 1967, following the French decision to withdraw from the military structures of NATO it was re-located to Casteau, near Mons in Belgium. This entry consisted of a selection of material from the civilian post offices which operated within the military complex of SHAPE both in France and in Belgium. It contained examples of both datestamps and the machine cancellation from both countries. It also includes registered items from both countries and examples of postcards showing the headquarters building, again from both countries.

Peter High with an entry titled “Chief Officer David Freeman”. This was part of a correspondence from David Freeman, Chief Officer, Merchant Navy (Furness Withy & Co) who was shipwrecked three times by enemy action but who survived the Second World War. Items shown came from his membership of the Deep Sea Scouts, through 2nd Officer on a merchant ship to Chief Officer of the Hospital Ship Newfoundland. Three ships sunk under him, the last being the Newfoundland.

Peter O’Keeffe with an entry titled “Mail not delivered to POWs in the UK, in Germany, etc”. This was a selection of items which were addressed or sent by military personnel several being Prisoners of War in WWII which were not directly delivered, as addressed, due to the addressee being killed, missing, captured, transferred or repatriated, including items recovered by the Allied forces advancing in Italy or Germany. Many items being marked “Returned to sender”. One was to a soldier repatriated from Switzerland in June 1944, another with a single word deleted (this may have been ‘deceased’ as alongside, it was originally signed by an officer, then obliterated and initialled by another officer and marked “Believed Prisoner of War”) - the envelope was not opened on its return to the sender, the soldier’s sister (or daughter) - perhaps she had heard he had been killed. Next were a German envelope and four German postcards which had been sent by British POWs to the UK but which had not left Germany when they fell into the hands of the Allies. These were then passed to the addressees - one however appears to have taken its time (or the dates are wrong, as it appears to have taken 11 months!). Finally two envelopes from Germany to German POWs held in Britain, one in December 1946 and one in February 1947 - both were returned to sender marked ‘Repatriated’.

Chris Stephany-Weddell with his entry titled “The Gatt brothers of Malta - Egyptian Expeditionary Force mail”. This display showed various types mail either sent by or posted to William Raphael Gatt or his brother Alfred Joseph Gatt while they were serving with in Egypt with the Egyptian Expeditionary Force. Both of the brothers served with the Royal Malta Artillery. William Gatt also served as a Medical Officer for the R.M.A. and the R.F.A. which he was seconded to. Alfred Gatt was one of only four Maltese officers who were awarded a Military Cross during World War One. Both brothers were known stamp collectors hence the large amount and variety of mail seen.