Prisoners of War in Turkey WW1

We had five entries for the President’s Cup competition, which was slightly more than when we last held it in 2019.  It included an entry sent in by post from a member who couldn’t attend and a submission by email from an Australian member.  Details of the Competition are given below.  We had 14 members sign in, a low number but which was possibly not unexpected given the circumstances.  We had a number of apologies, several for medical reasons, but who we hope to see at our December Banstead meeting.

At the start of the meeting Richard Berry, who was our President at the time, present Lorraine Maguire with her certificate for winning the President’s Cup competition in September 2019 for her entry on “Kiwi’s in Captivity” - this is the topic of a full display by Lorraine which we should have seen in June this year but which was cancelled due to the COVID lockdown.  However, all being well she will give the presentation at our afternoon meeting on 8 January 2022 when we return to the Union Jack Club.  This was followed by Vice President Geoff Hanney presenting Richard Berry with his certificate for winning the President’s Cup competition in September 2018, with his entry on the “Second Italo-Ethiopian War - Military Post Offices”.

Now to this year’s President Cup competition - there were five entries and the winner of the President’s Cup Competition for 2021 was Colin Tabeart with his entry on “Allied (non-British) Submarines in WW2”: As Germany overran Europe some submarines escaped to the UK.  Some French boats operated from Harwich and the Ninth Flotilla was set up at Dundee, operating Polish, Norwegian, Dutch and French boats supported by HMS Ambrose.  In the Mediterranean a few Greek boats escaped to Alexandria and some Polish boats operated from Malta.  Dutch boats in the Dutch East Indies escaped to Fremantle, Western Australia.  In the Pacific USN submarines virtually annihilated the Japanese merchant marine.  The display shows covers to/from boats of all these Allies except Norway - never found a cover yet! 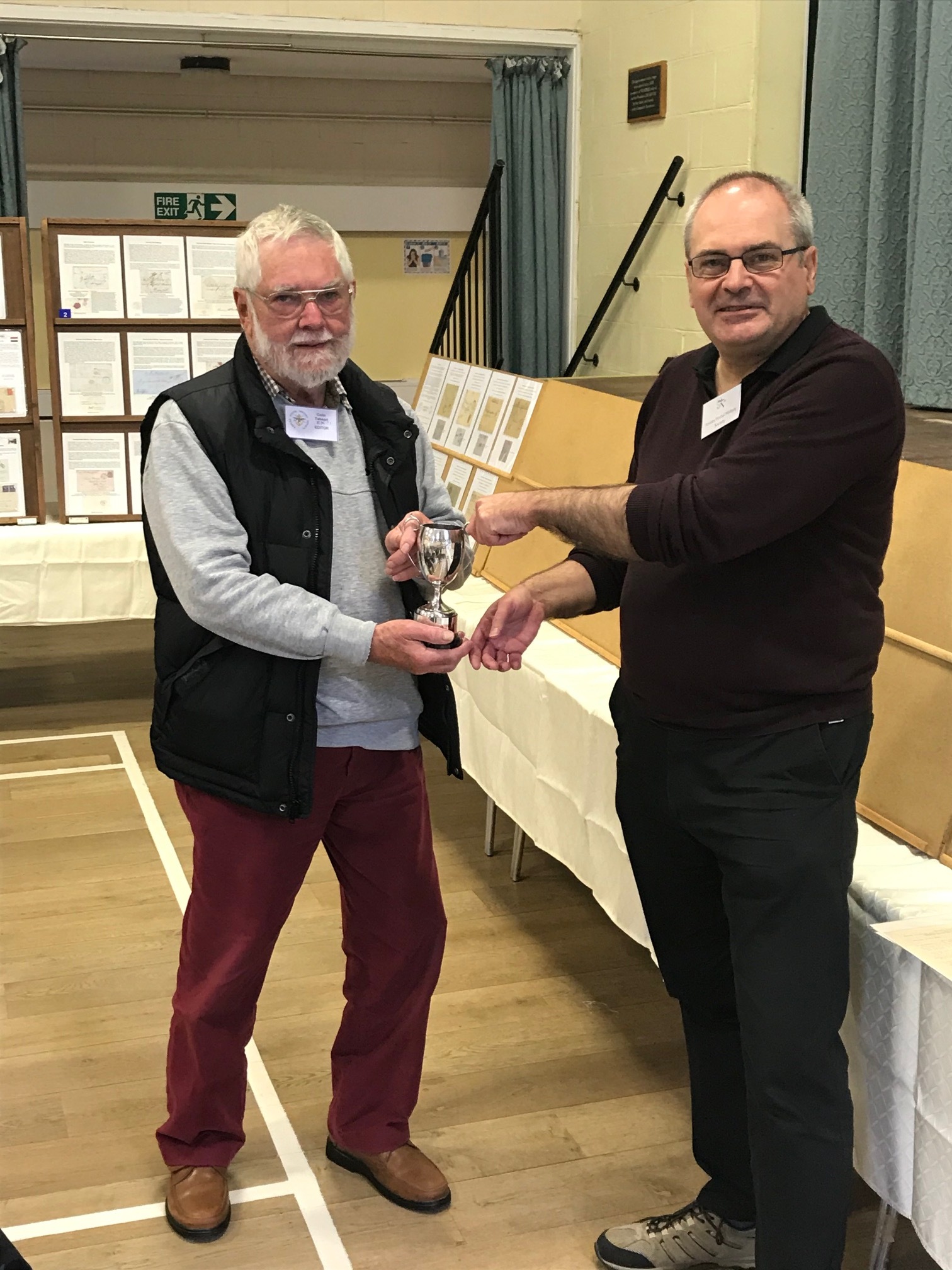 Chris Grimshaw came second with an entry on “North Persian Force” which showed the development of censorship on civilian mail by the military authorities 1918-20.  Third was Gary Diffen with his entry on “The Australian Gallipoli Campaign - The Shortage of Writing Materials May to August 1915”: From late May to August 1915 there was an acute shortage of writing materials for the Australian soldiers at Gallipoli.  “Necessity is the mother of all invention” and soldiers began to find other materials to write home.  The cardboard inside ammunition boxes was a favourite, with other supply boxes for chocolate, jams and cigarettes also used to write home.  The entry shows the ingenuity and desperation of the soldiers to write to loved ones at home.

The other two entries were Julian Bagwell with “Early Guernsey Philatelic Material with a military Component”: Most Guernsey military material relates to the German occupation of the Channel Islands during WW2.  Julian instead selected various items from his Guernsey collection that have a military component but from a much earlier period - the presentation starts in 1797 and finishes in 1902.  All the items are separate and relate either to various military gentlemen, units or conflicts, the latter including the Napoleonic War, the ‘Ragamuffin’ war in Brazil and the Second Opium War in China.  The military men include Major General Napier and General de Saumarez, the latter a member of a famous Guernsey family, one of whose predecessors had fought with Lord Vincent, who features on an earlier sheet.  The other entrant was Peter High with “British Hospital Steam Yachts of the First World War”: At the beginning of the First World War several luxury steam yachts belonging to wealthy businessmen were offered to the Government for use as Red Cross hospital ships.  Whilst they could not fulfil the full role of a hospital ship they proved very useful for the conveyance of medical materials and nurses.  Some even carried sick and injured.

As we had a number of empty frames as a result of the lack of competition entries, Michael Dobbs showed his zoom display given on 19th October of Army and RAF Recruitment Cachets used in 1958 - this is a project he started some time ago and wishes to move forward, so he hopes both the zoom and this meeting encourage members to send him scans of their covers so that he can record both locations and periods of use.  He also showed two underpaid air mail letters and accompanying letters from the Home Postal Depot seeking repayment of the 3d additional postage to allow them to go airmail, known as the “Dutch” scheme.  In addition our Librarian / Immediate Past President Richard Berry showed eight A3 sheets of ephemera concerning the death in 1978 of L/Cpl Collett, who served with the Rhodesian SAS.  The display included various letters of condolence from various Rhodesian ministries, the acting President, Army, Combined Operations HQ, etc.  It included a photo of L/Cpl Collett as well as relevant newspaper clippings - we were promised more of that at and a talk at some future meeting.

After lunch it was over to the display by Peter Burrows - Peter once again regaled us with a most wonderful, fantastic array of covers, postcards and ephemera all relating to different welfare organisations, the likes of which we have not seen before in such quantity.  Peter stated that this was a snapshot of his collection (phew - what a snapshot!) and he hoped that it would give a feel of the very many organisations that provided welfare support in both world wars.  He started off by showing a letter-sheet from 1885 asking for newspapers and magazines for soldiers. As stated the main elements of his display reflected both world wars.  The welfare activities included setting up leave clubs and rest houses as well as canteens and recreation clubs and even Red Cross hospitals.  The various organisations that did this advertised their activities through the production of postcards and leaflets; they also provided envelopes and letter-sheets for soldiers to use and these displayed the crests, logos or badges of the organisations concerned.  Some of the larger organisations were the Young Men’s Christian Association (YMCA), Salvation Army and Red Cross, but there were smaller organisations such as Catholic and Jewish welfare organisations, British Legion, Christian Science and the Women’s Voluntary Service.  Another American organisation was the United Services Organisation (USO) which ran a large number of clubs and canteens or had other organisations run them on their behalf, such as the YMCA, Red Cross, Salvation Army, Traveller’s Aid Society and others.  Many of these centres were established in the UK or USA to serve soldiers on leave as well as in the war zones or occupation areas.  The display reflected all these organisations and locations and others.  There were also picture postcards of the Union Jack Club from 1908/09 period as well as postcards produced by the YMCA in 1908 for summer training camps as well as picture postcards of views from establishments run by the Navy & Army Canteen Board (NACB) which on 9 December 1920 became the Navy, Army and Air Force Institutes (NAAFI).  During WW1 the Americans sent over volunteers to run ambulances for the French Army and this was reflected in letter-sheets and postcards from these organisations; also a picture postcard of the Beaver Hut run by the Canadian YMCA in London and of the YMCA Eagle Club also in London and cards from the Indian Soldiers Welfare Funds.  For WW2 there were postcards provided by Jewish Welfare Board for various Jewish festivals; as well as cards from Polish, Australian and Canadian welfare organisations and from Belgians, who set up various organisations including Invalided Belgian Soldiers.  As we entered the post-WW2 period there were postcards and leaflets produced by the UJC which set out their facilities in the 1950s and also a booklet on the various BAOR leave centres in Germany and Austria in the 1950s.  This summary reflects only a glimpse of what was shown - a really fascinating display. 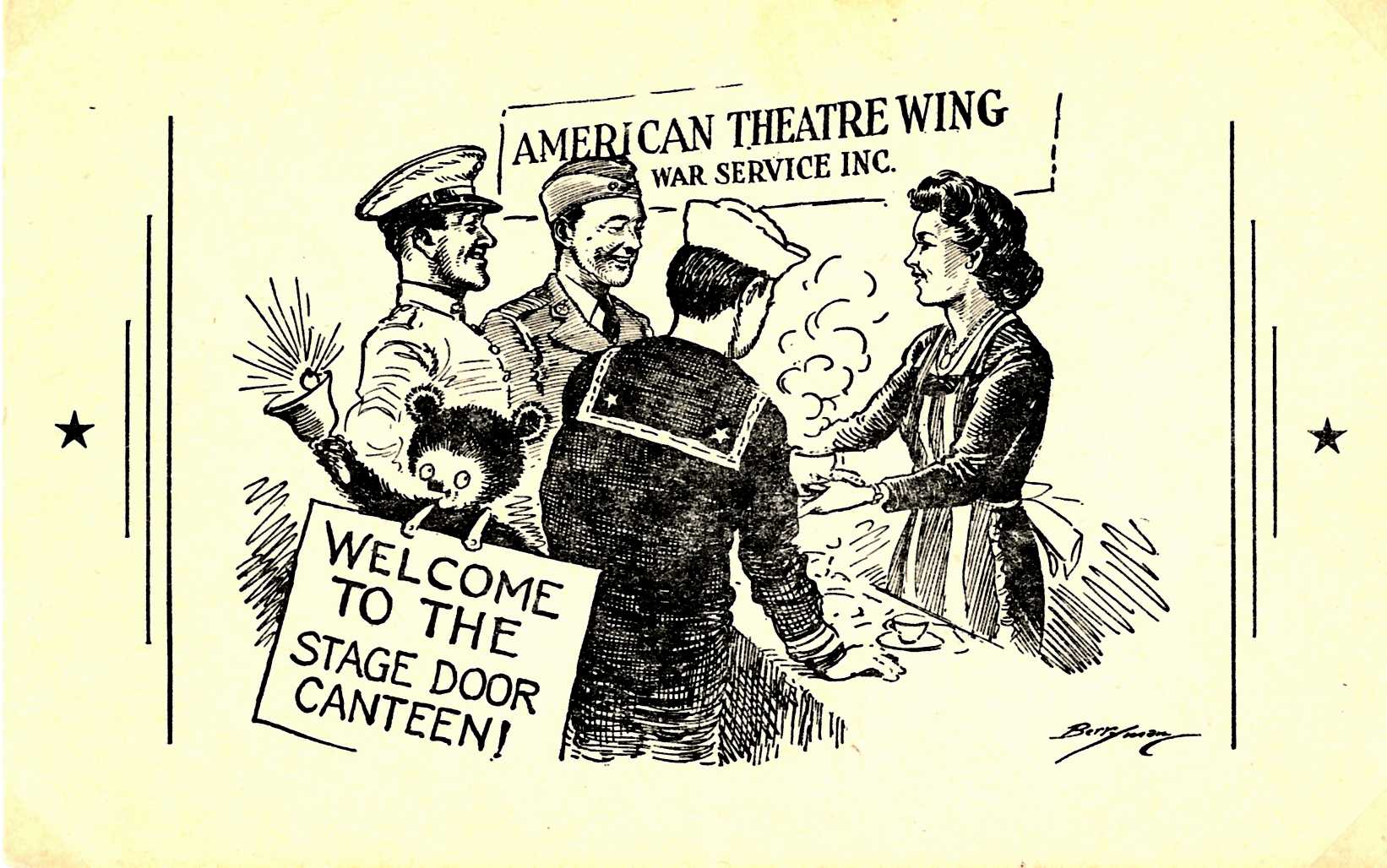 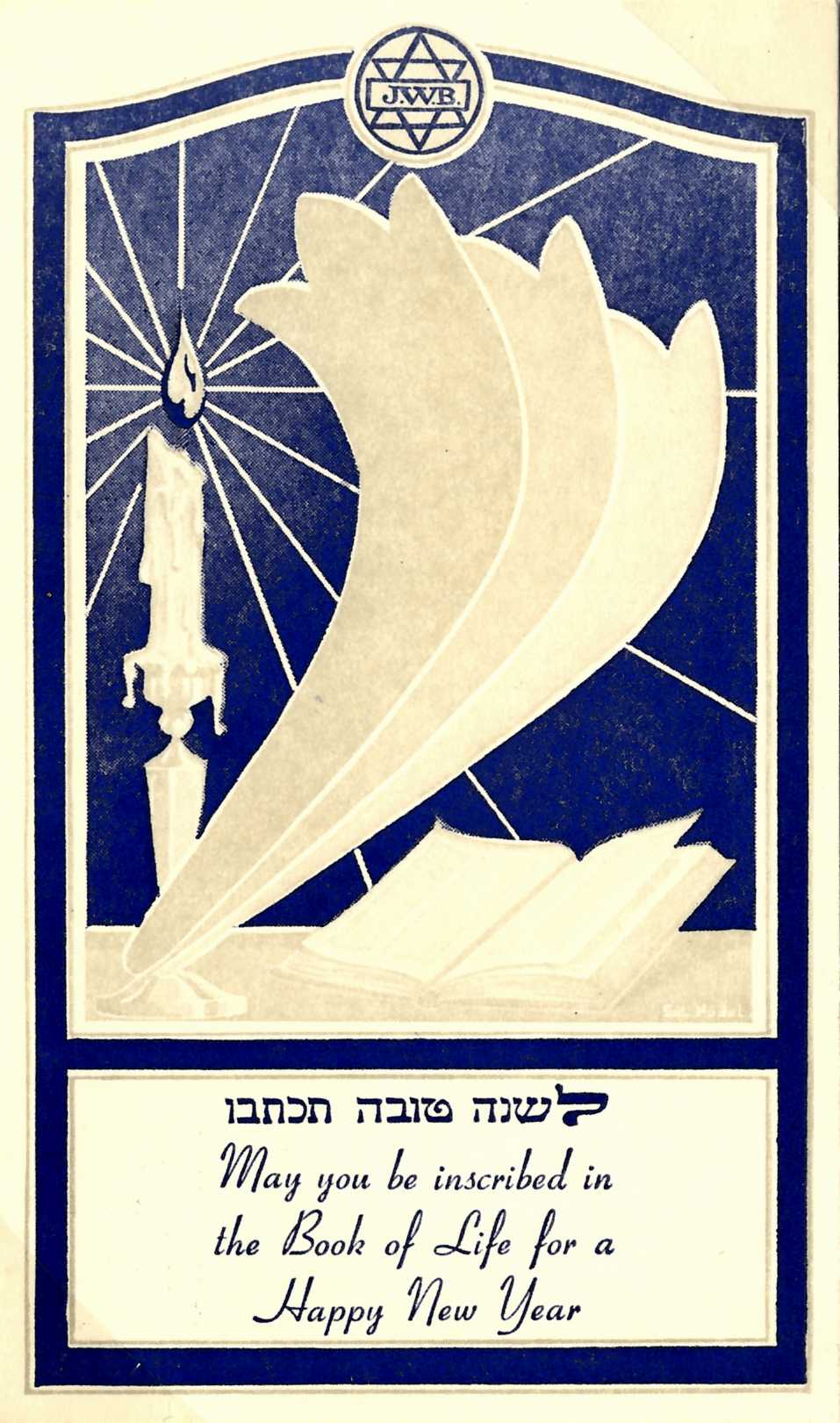 Fig.3 - Postcard issued jointly by the American JWB and USO for Rosh Hashanah and postmarked Lincoln, Nebraska on 4 September 1945. 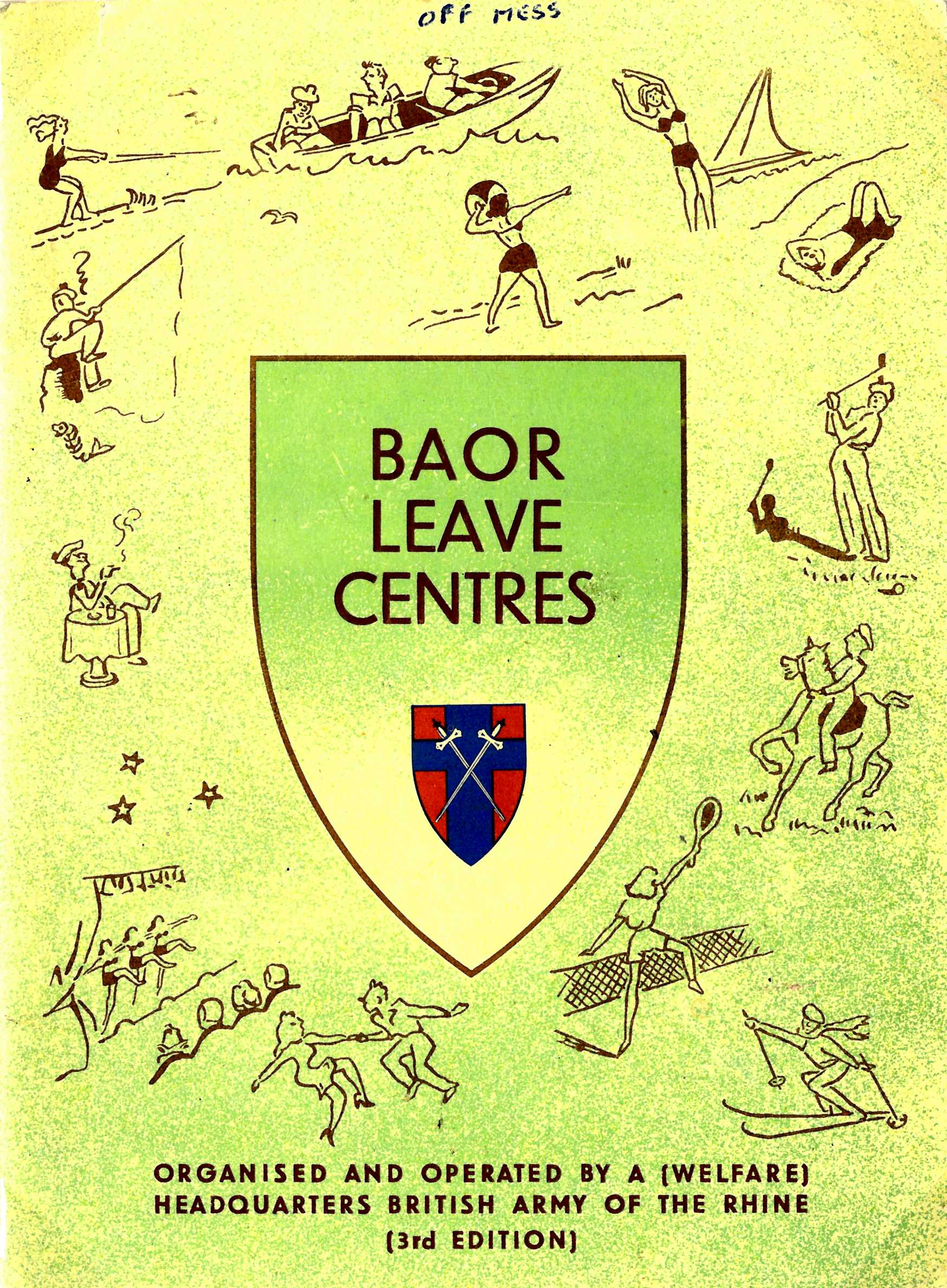 Fig.4 - Cover of the booklet on BAOR Leave Centres